An estimated 1,100 people gathered on February 12 to celebrate Lunar New Year–also known as Chinese New Year–in the Lock 3 Commons, which were adorned with auspiciously colored red and gold lanterns and lights, as well as more than a few red noses and cheeks. Those who weren’t able to huddle into the building to escape the biting winter temperatures peered through windows from outside the building, hoping to catch a glimpse of the dazzling cultural performances happening inside.

Lunar New Year is one of the most important celebrations of the year in East and Southeast Asian cultures. It’s a time to honor ancestors and deities, to visit family and feast. It’s observed in China, Korea, Vietnam, Malaysia, Taiwan, Singapore, and the Philippines, and festivities last a full two weeks from the lunar year’s first new moon to its first full moon. These dates typically fall between January 21 and February 20. This year, they took place February 1-15 and ushered in the year of the Tiger, the third in the 12-animal Chinese zodiac cycle. According to traditional belief, those born in the year of the Tiger tend to be passionate, dynamic, rebellious, and values driven. 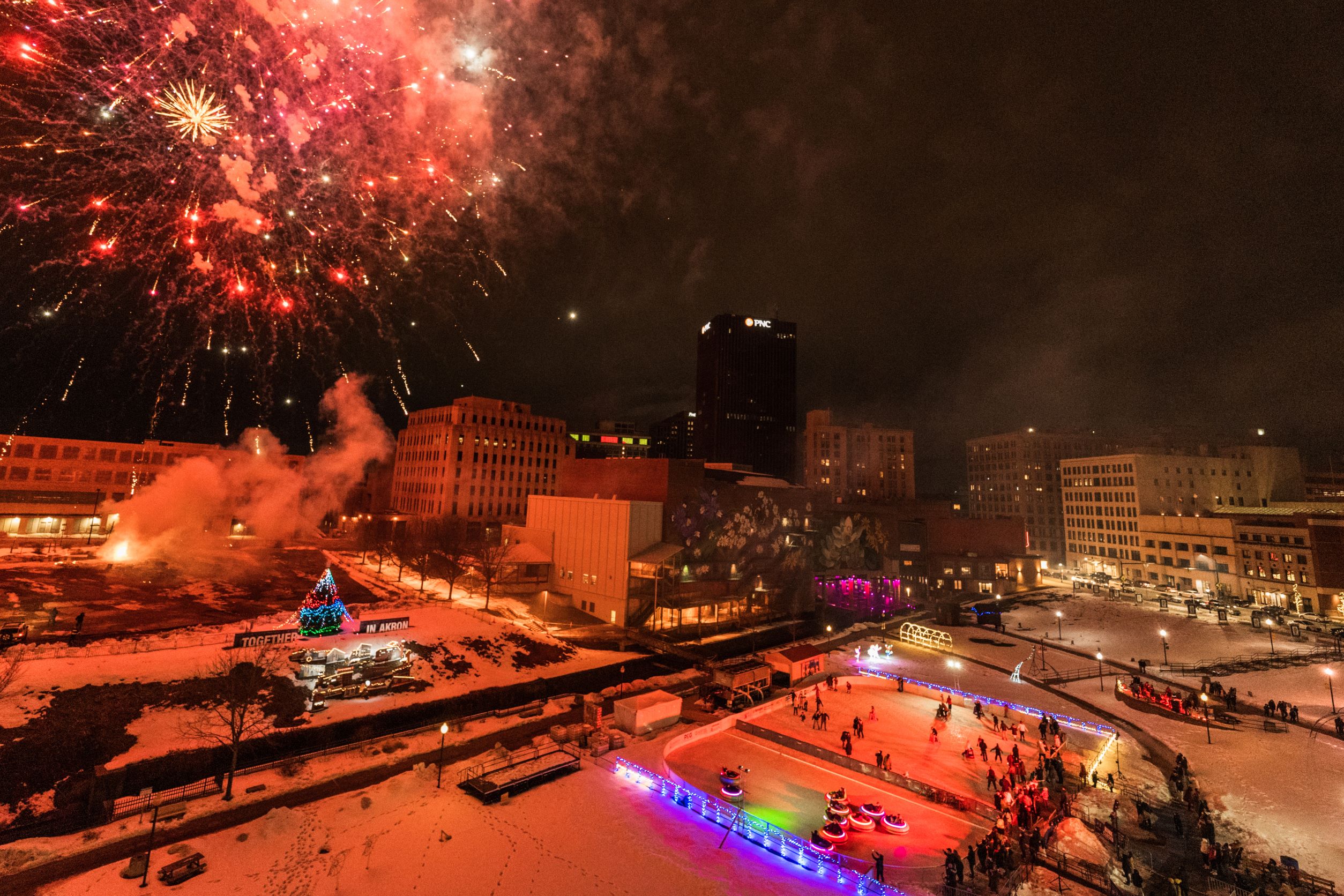 Due to inclement weather, the decision was made to bring the celebration indoors. The majority of crowd members was masked, in observance of Covid-19 protocol, and doors to outside were wide open to allow fresh air to flow into the space.

If the turnout of this event was any indication, this new year is sure to be one of prosperity, abundance, and success. Between the dances and demonstrations by performers young and professional, the glittering display of fireworks at the end of the night, and the wonder on the faces of onlookers, we hope this was only the first of many such Lunar New Year celebrations to come. 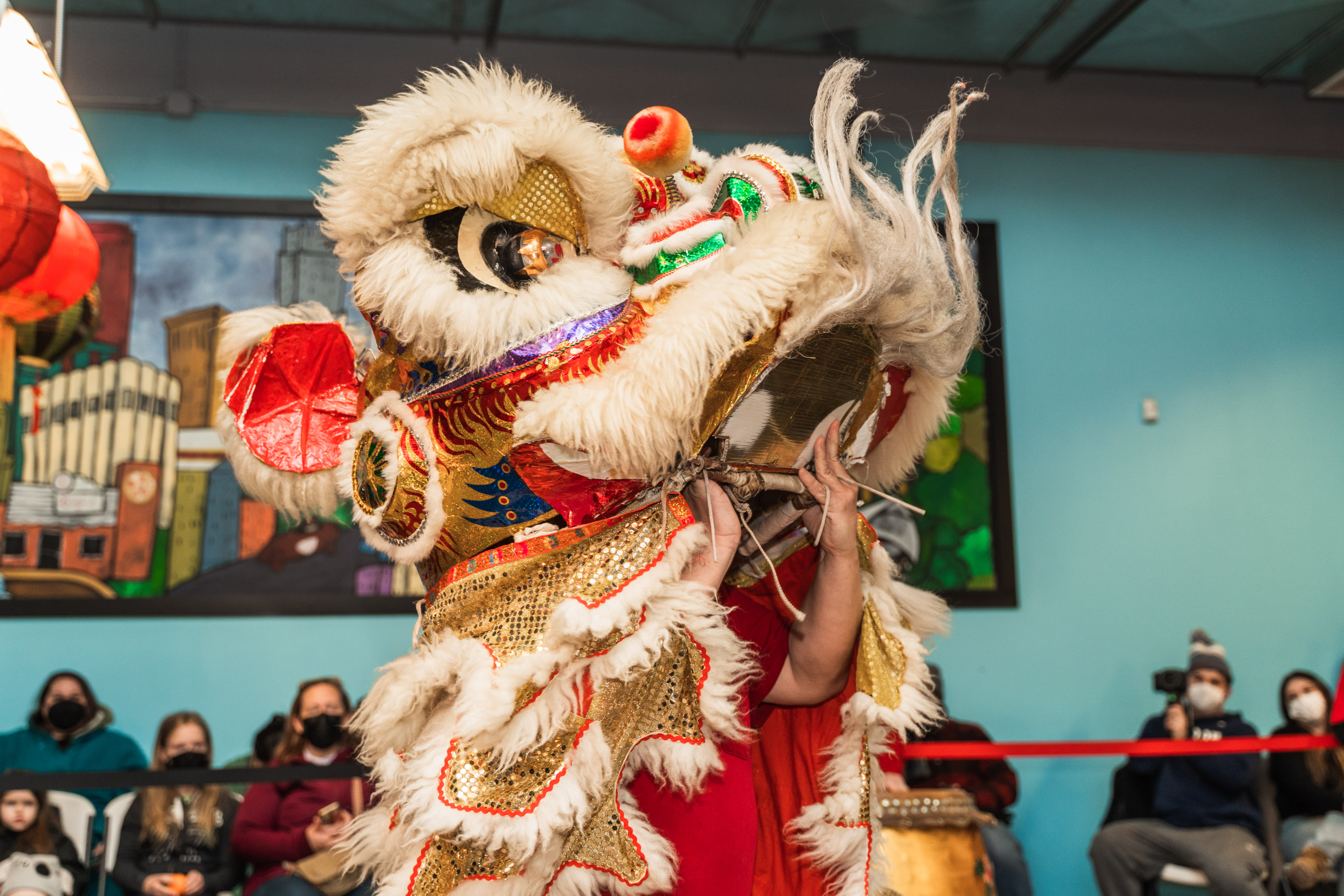 The evening began with opening remarks from Elaine Tso, Chief Executive Officer of Asian Services in Action (ASIA), inc. Tso welcomed the audience, who was not only seated bordering the perimeter of a large performance space in the middle of the room, but was crowding doorways, peering through windows, and standing wherever space was available.

Following Tso’s opening remarks was a masterful performance by the Kwan Family Lion Dance Team, who has been performing the traditional Chinese dance for 30 years in Northeast Ohio. While two family members animated an elaborate, sparkling lion costume, the others accompanied the dance with a drum, gong, and cymbals.

After the Lion Dance came a martial arts demonstration by international Kung Fu Master Sen Gao of Ohio Wushu Academy. Master Gao appeared again later in the lineup to perform a routine with two nine-section whips, during which he entranced the crowd by rotating his weapons at lightning speed. 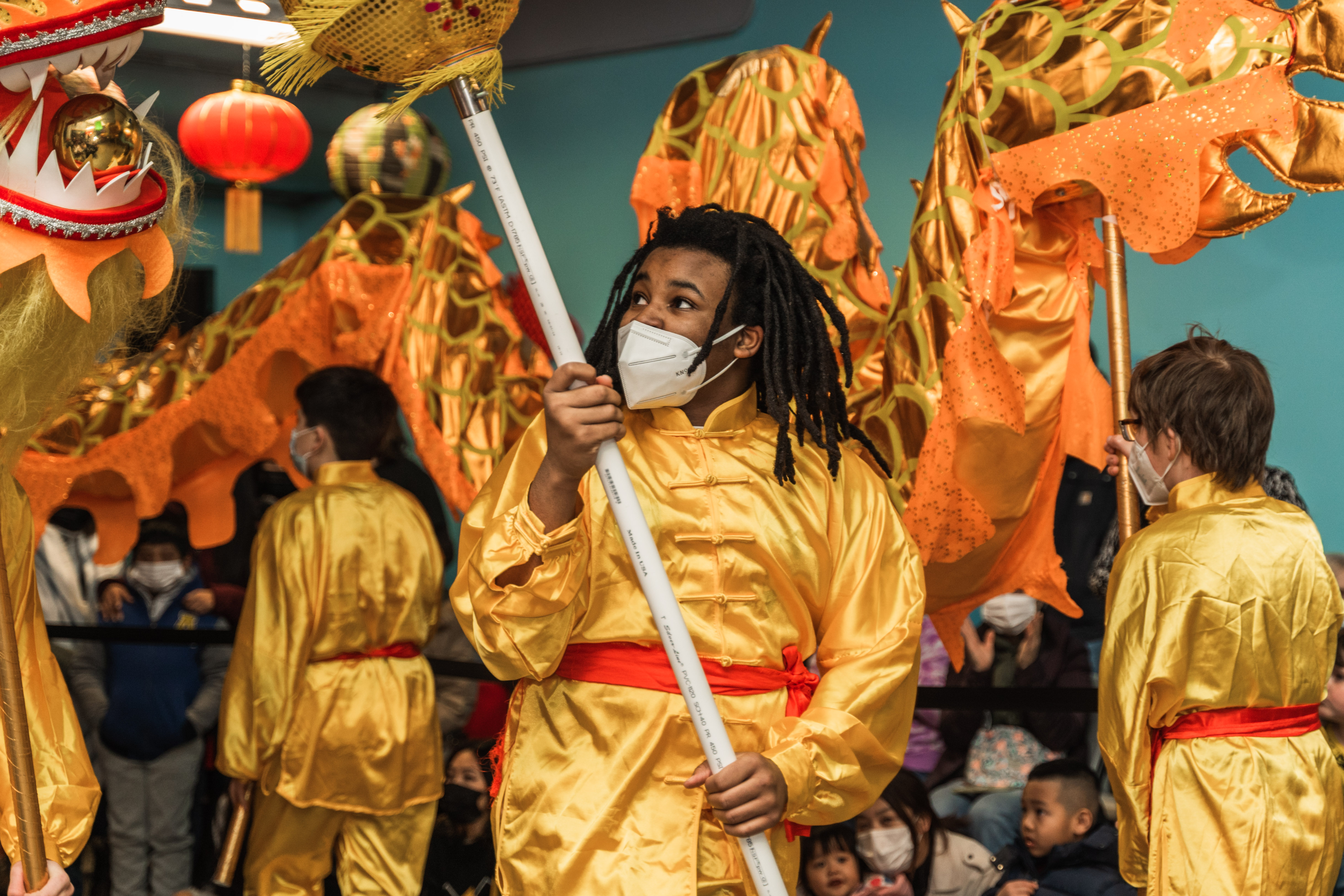 Other performers included Master Maochang Zhang, who gave the Face-Changing performance, an ancient Chinese dramatic art that’s part of the Sichuan opera; the Glory Drum Team of Cleveland, who performed the traditional Waist Drum Dance; and students from the National Inventors Hall of Fame STEM Middle School, who learned how to perform the Dragon Dance under the instruction of the middle school’s own Coach Qing Liang, and Master Gao. The crowd was energized by the vibrant colors, traditional cultural performances, and the accompanying music.

While all this was happening in the main event space, volunteers from the Akron Children’s Museum assisted curious kids and adults with a holiday craft in an adjacent room. Clear plastic jars were covered with red tissue paper and gold glitter to make festive lanterns, which were illuminated by small LED tea lights placed into each one.

In the hallway just outside the event space, The University of Akron’s Confucius Institute gave away free commemorative t-shirts to attendees. 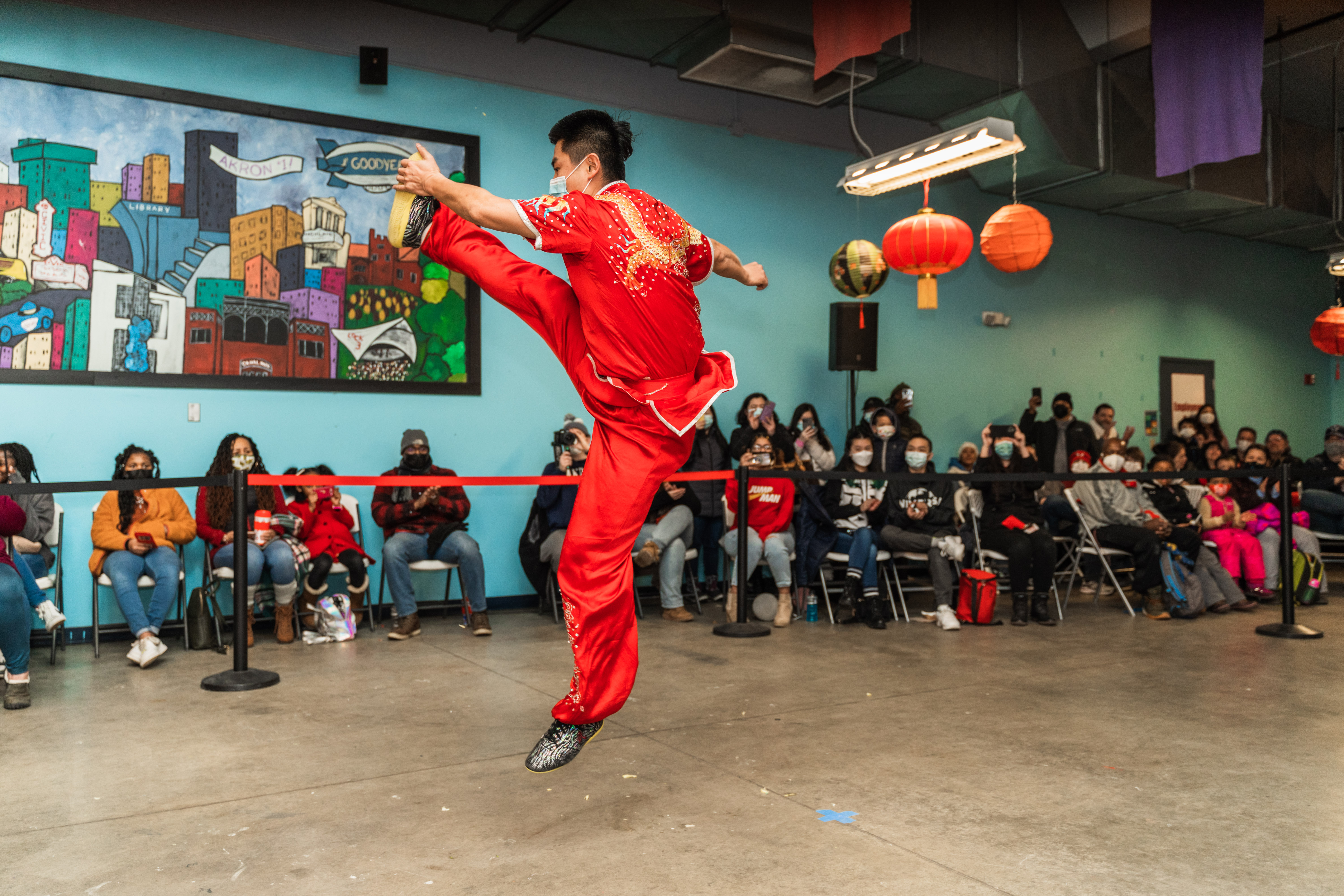 The Kwan family headed outside after their performance early in the evening to allow for photo opportunities with the lion, while STEM Middle School students adorned in red and gold dresses distributed red envelopes to passersby. In Chinese tradition, red envelopes are filled with lucky amounts of money during New Year celebrations and are given as gifts to family members. In a uniquely Akron twist, a number of red envelopes were filled with coupons to nearby downtown businesses.

Toward the end of the evening, the STEM Middle School Dragon Dancers meandered through Lock 3, finally giving a close-up view to those in the audience who weren’t able to fit inside the building. This was followed by a dazzling fireworks display. Families huddled together, small children bounced on their parents’ knees to keep warm, skaters on the ice rink paused, and hundreds stared in awe at the cascades of red and gold glitter from the sky. 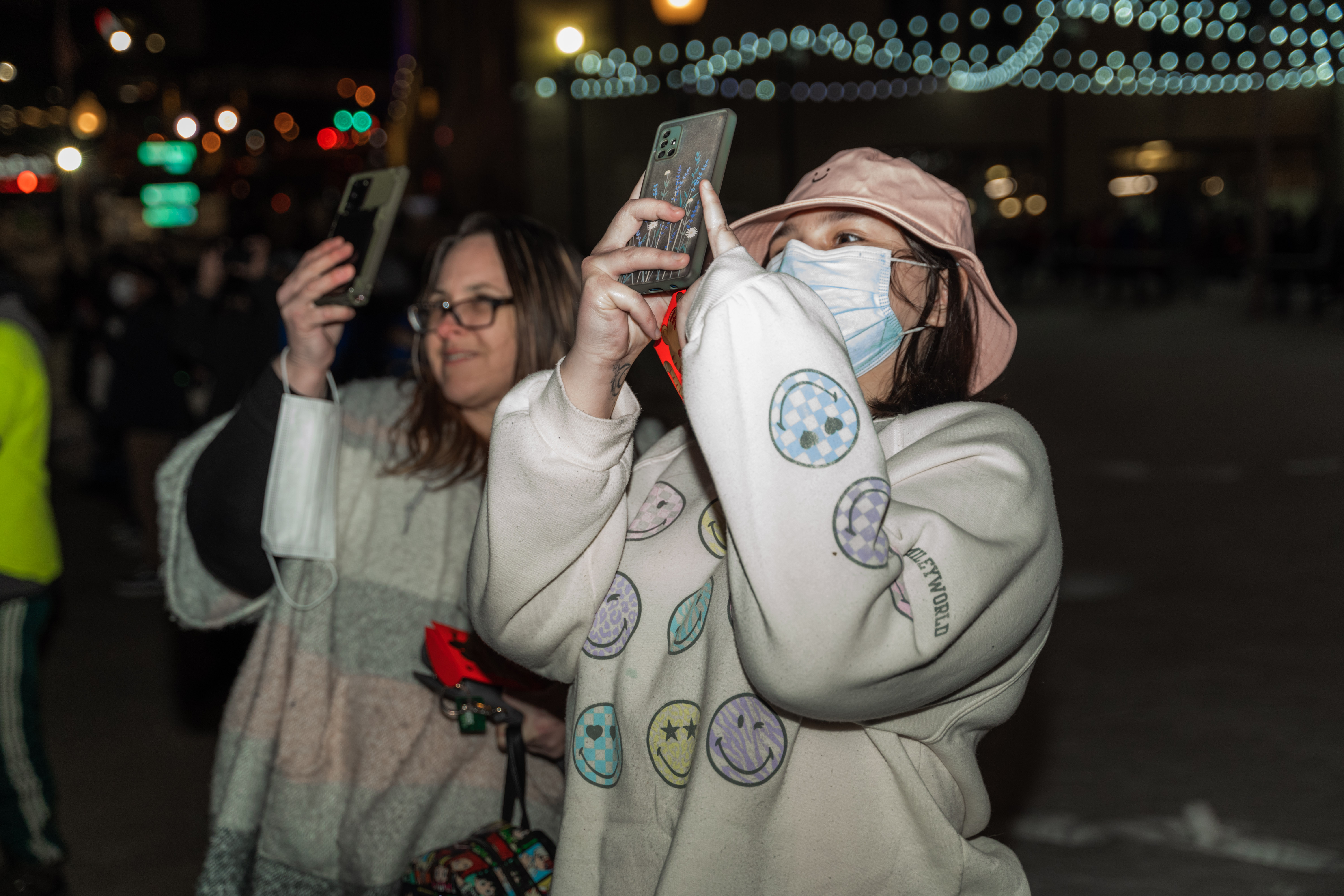 This was the first community event coordinated by Elizabeth Flanagan, DAP’s recently hired director of engagement and events. When Flanagan moved to Akron from Lakewood and started her new career, she wanted to focus on building engagement and challenging herself by planning an event DAP hadn’t done before. When she learned that Lunar New Year was a celebration we had been thinking about pursuing for quite some time, it became immediately evident that it would be her first project.

Flanagan worked closely with community partners to plan and execute the evening and is in awe of the levels of appreciation, kindness, and patience that were given to her in her relatively new role. After two years of a global pandemic, seeing the Lock 3 Commons full of people with smiling faces was a heartwarming glimmer of normalcy, a promise for what the future may bring. Flanagan is happy to have the opportunity to promote diversity and inclusion downtown and to bring the community together. She’s excited to dedicate energy to the event in coming years, especially as the Confucius Institute–the organization that formerly hosted New Year festivities–is closing this June.

Flanagan’s hope for Akron’s new Lunar New Year tradition: “That it can continue to grow and become an annual event so that we can continue to celebrate the diversity that makes Akron so special.”

Downtown Akron Partnership (DAP) was proud to present the city’s first centralized, large-scale Lunar New Year celebration, building upon celebrations that have been hosted in years past by the Confucius Institute at The University of Akron. It was a night to remember, full of color, tradition, vibrancy, and connectedness. We’re thankful for Dr. Linn and our partners at the University for allowing us to share what they’ve developed over the years as a wonderful community event, and we’re grateful to have done so along with ASIA, Inc., Akron Public Schools, the Ka’Ren Community of Akron, Inc., Civic Youth Engagement, Akron Children’s Museum, Global Ties Akron, and Akron METRO RTA. We’re grateful, too, for support from Knight Foundation, GAR Foundation, Akron Community Foundation, Akron Civic Commons, and Ohio Arts Council.

The University of Akron
302 Buchtel Ave