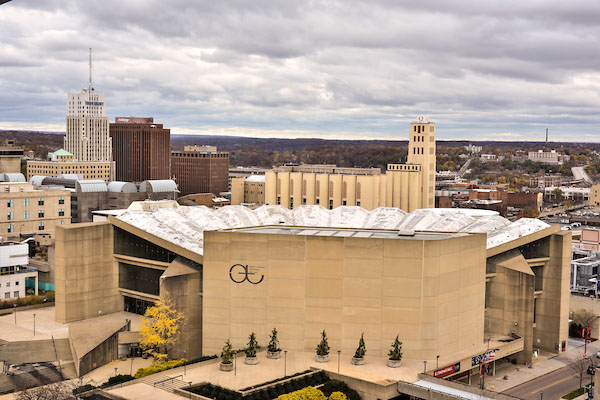 E. J. Thomas Performing Arts Hall, built by The University of Akron and a group of dedicated community leaders, begins its 36th year as an outstanding performing arts complex and cultural center. Since its first season in 1973, the Hall has exceeded expectations and grown in stature as a cultural and community center for northern Ohio.

Located on the corner of University Avenue and Hill Street on The University of Akron’s campus in downtown Akron, Thomas Hall annually hosts more than 400,000 people of all ages who visit the Hall for a variety of programs, activities and performances ranging from the University Forum Speaker Series, celebrations and community fundraising events to a popular Broadway Series and special attractions.

The Hall also serves as home to The Akron Symphony Orchestra, Tuesday Musical Association, Children’s Concert Society and Akron Youth Symphony. For further information on Thomas Hall log on to our web site at www.ejthomashall.com.

The Hall was named in honor of Edwin J. Thomas, retired Chairman and Chief Executive Officer of The Goodyear Tire & Rubber Company, long-time member of The University’s Board of Trustees and a leading driving force for community progress for more than a half century.

Architects Caudill, Rowlett and Scott of Houston, and Dalton, Van Dijk, Johnson and Partners of Cleveland were approached by The University to create an overall design which has resulted in one of the world’s finest multi-purpose halls in terms of design, acoustics and creative mechanisms. Theatre consultant Dr. George Izenour of Yale University and acoustician Dr. Vern Knudsen of The University of California, Los Angeles, were instrumental in the planning and development of the movable ceiling in order to regulate the volume, manipulate the acoustics and alter the physical dimensions of the main hall.

Located in Goodrich Lobby and weighing in excess of 40 tons are the 27 chrome Witzman Counterweights which balance the ceiling in the house and are computer controlled. The configuration of the counterweights determines the position of the ceiling in the house. The entire transformation takes approximately 15 minutes to complete. The theatre has the ability of being used in its legitimate theatre capacity or converted into a symphony hall with the erection of an orchestra shell.

Upcoming Events at E.J. Thomas Hall - The University of Akron