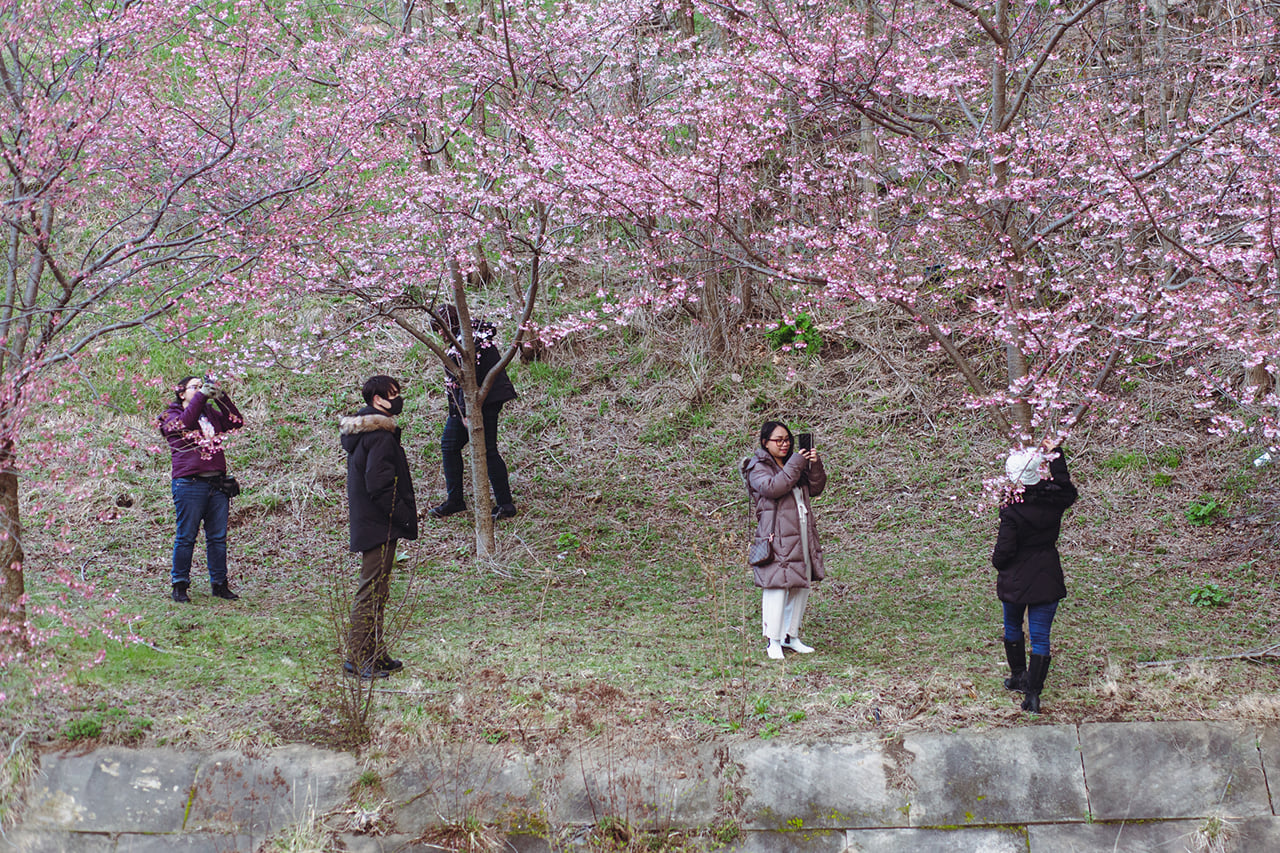 Above: Visitors posing for photos with the cherry blossoms at the Second Annual Sakura Cherry Blossom Celebration (Photo: Talia Hodge)

Saturday, April 9, brought a full spectrum of weather conditions. From heavy flurries in the morning to a sunny afternoon and chilly, overcast evening, Saturday embodied the beautiful moodiness of springtime. For this, it was arguably the perfect weather for the Second Annual Sakura Cherry Blossom Celebration in downtown Akron.

Nearly 2,000 luminaries lined the Towpath Trail between Ohio & Erie Canal Park and Lock 3 with soft fuschia light. The luminaries provided an ethereal, calming presence that ushered visitors along the trail, both before and after dark. Although the cherry blossom (sakura) trees along the Towpath proved to be reluctant bloomers this year due to cooler temperatures, the flowers began to burst from their buds right on time for the celebration. These emerging blossoms made the walk along the canal–the main attraction of the evening–especially beautiful.

Above: The Towpath Trail near Lock 1, featuring a storywalk and luminaries after dark (Photo: DAP Staff)

Despite the chilly weather, we saw over a thousand people attend the event from across the state of Ohio, hoping to witness the blooms that only flower for a short time during spring. 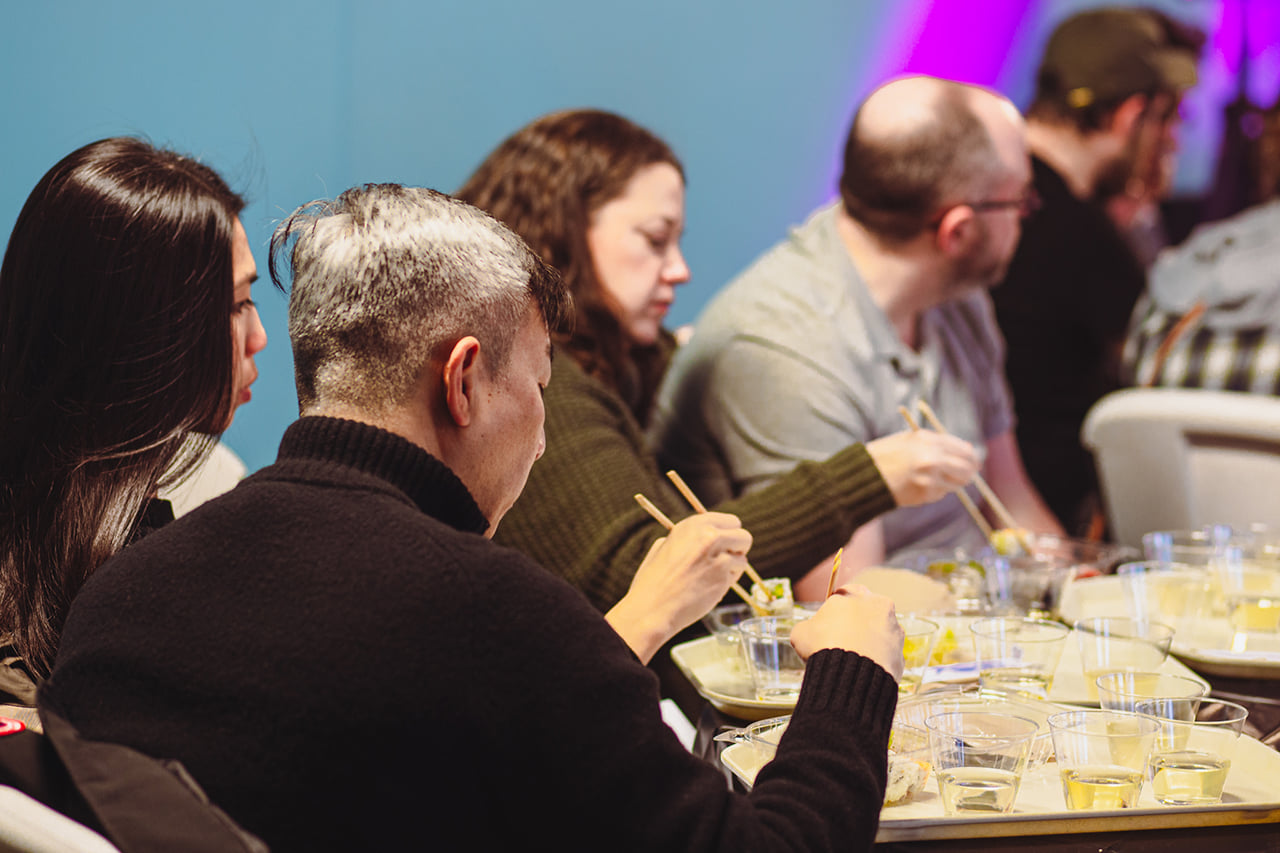 Above: Nearly 60 people took part in a sake and sushi tasting with sake expert John Gauntner in the Lock 3 Commons (Photo: Talia Hodge)

In Japan, cherry blossoms carry immense significance. They are one of the most prominent images in Japanese culture, associated with new beginnings and symbolizing the ephemeral transience of life. When the sakura trees bloom in Japan, admiring them becomes a national pastime. Families and friends hold flower-viewing parties and picnics, and celebrations crop up across the country to welcome spring. Even items in stores become pink, sakura-themed beverages are drunk, and sakura-flavored sweets appear on restaurant menus.

The most common sakura species in Japan is the Yoshino cherry, which produces white blossoms only tinged with pink. Other varieties boast blossoms in stronger shades. Due to the diversity of climate in the country, the blooming season lasts from January to May, although peak blooming season is generally considered to be in March and April. 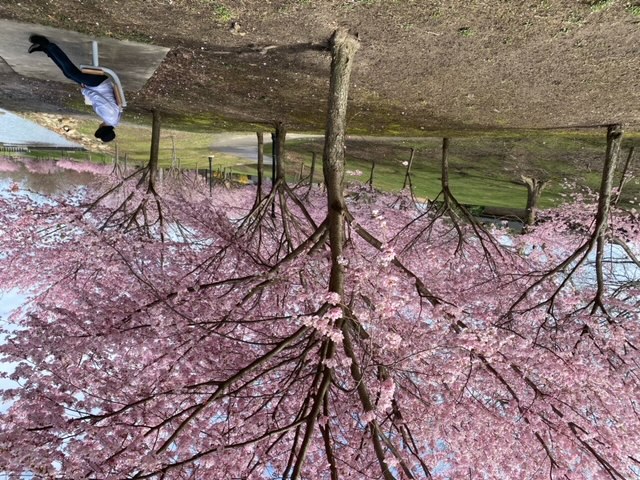 Above: Sakura trees in full bloom along the Towpath Trail just a few days after the April 9 event (Photo: Fukuo Hashimoto)

There are 472 sakura trees along the Towpath Trail in downtown Akron. They were planted by the Japanese Association of Northeast Ohio (JANO) in 2011 and 2012, in partnership with the City of Akron. JANO is a nonprofit organization established in 1991 to provide mutual assistance and friendship between Japanese and American people in Northeast Ohio, and they have planted countless sakura trees across the region. JANO’s work planting these trees symbolizes “the hearts of the Japanese people and creates a place of relaxation for people in all regions.”

We couldn’t have held this year’s Sakura Cherry Blossom Celebration without JANO’s planting and partnership in the event–nor without their work in the region and their unadulterated love for the cherry blossoms. 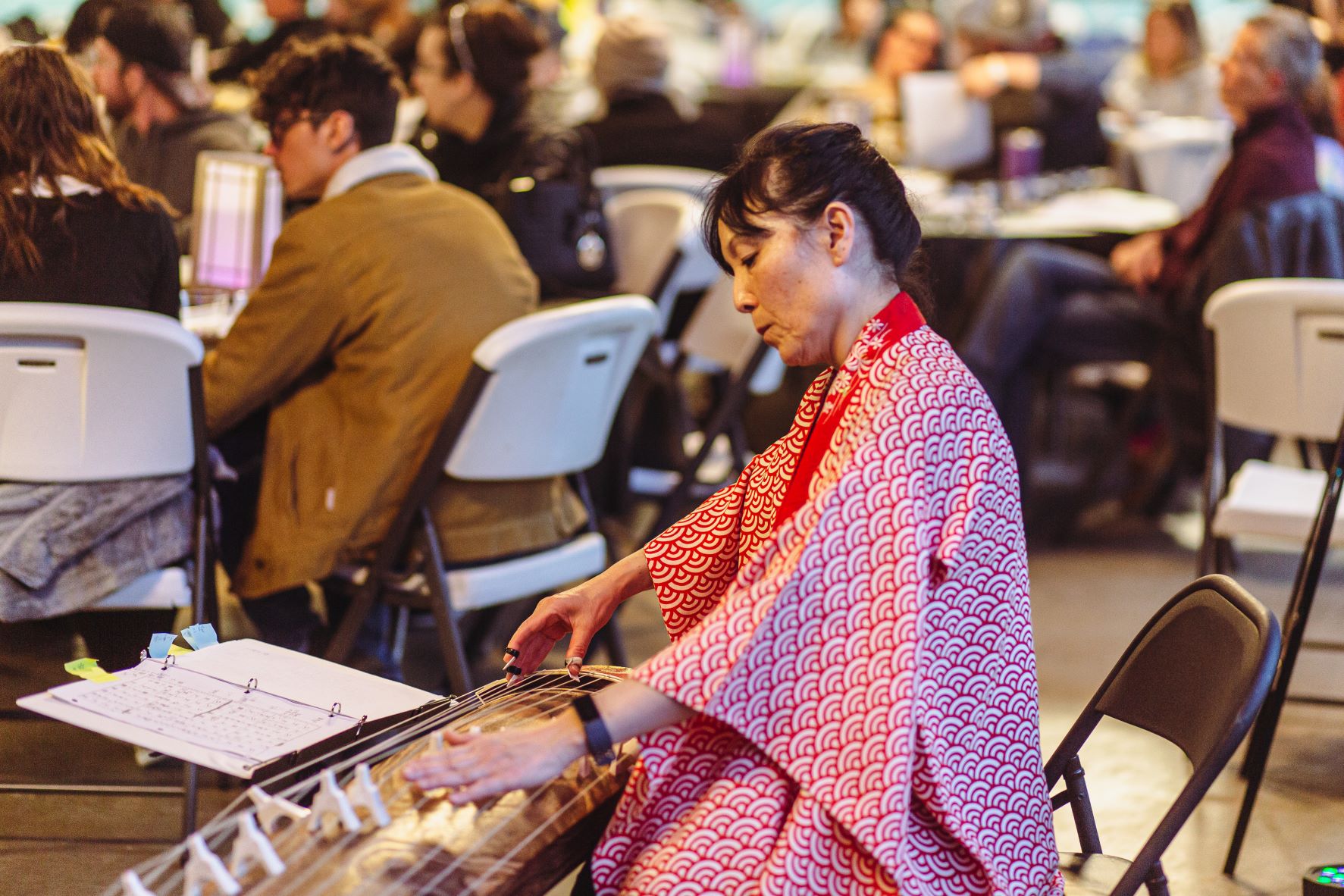 Above: Musician Miki Saito performing traditional Japanese music on the Koto. Saito was able to perform during the celebration thanks to support from the Ohio Arts Council (Photo: Talia Hodge)

We are extremely thankful, too, to the dedicated volunteers who joined us on Saturday to put up and take down all the decorations, ensuring a clean, beautiful, celebratory atmosphere. These volunteers came to us from JANO, ASIA, Inc., Civic Youth Innovation Engagement, and Summit Lake BUILD CORPS. We also had a number of helpful high school students assist us for the day.

Fukuo Hashimoto of JANO says his heart was warmed to see everyone working together as a team to put on the event, feeling that being able to partner with other local organizations has produced “a huge payoff of our small efforts for the Akron cherry tree planting.” We couldn’t agree more. 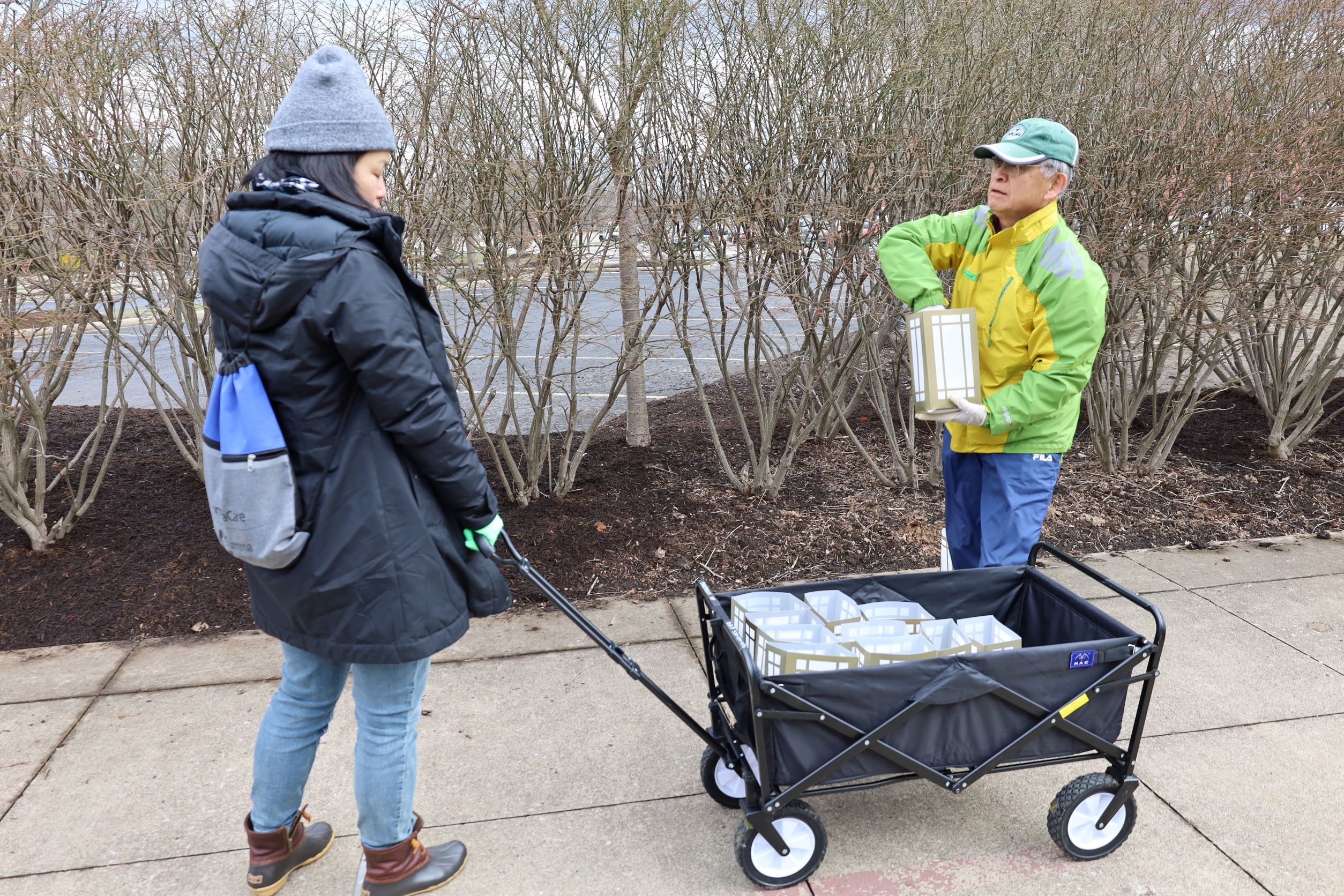 Above: JANO volunteers placing luminaries along the Towpath before the celebration (Photo: DAP Staff)

In addition to JANO, the day was made possible thanks to the Ohio & Erie Canalway Coalition, the City of Akron, Alpha Phi Alpha Homes, Inc., and Akron Civic Commons, with support from the Knight Foundation and Ohio Arts Council.

We look forward to growing the Sakura Cherry Blossom Celebration in coming years as we continue to watch the trees mature and thrive, inspiring and humbling us with a reminder of the beautiful transience of life’s most lovely moments. 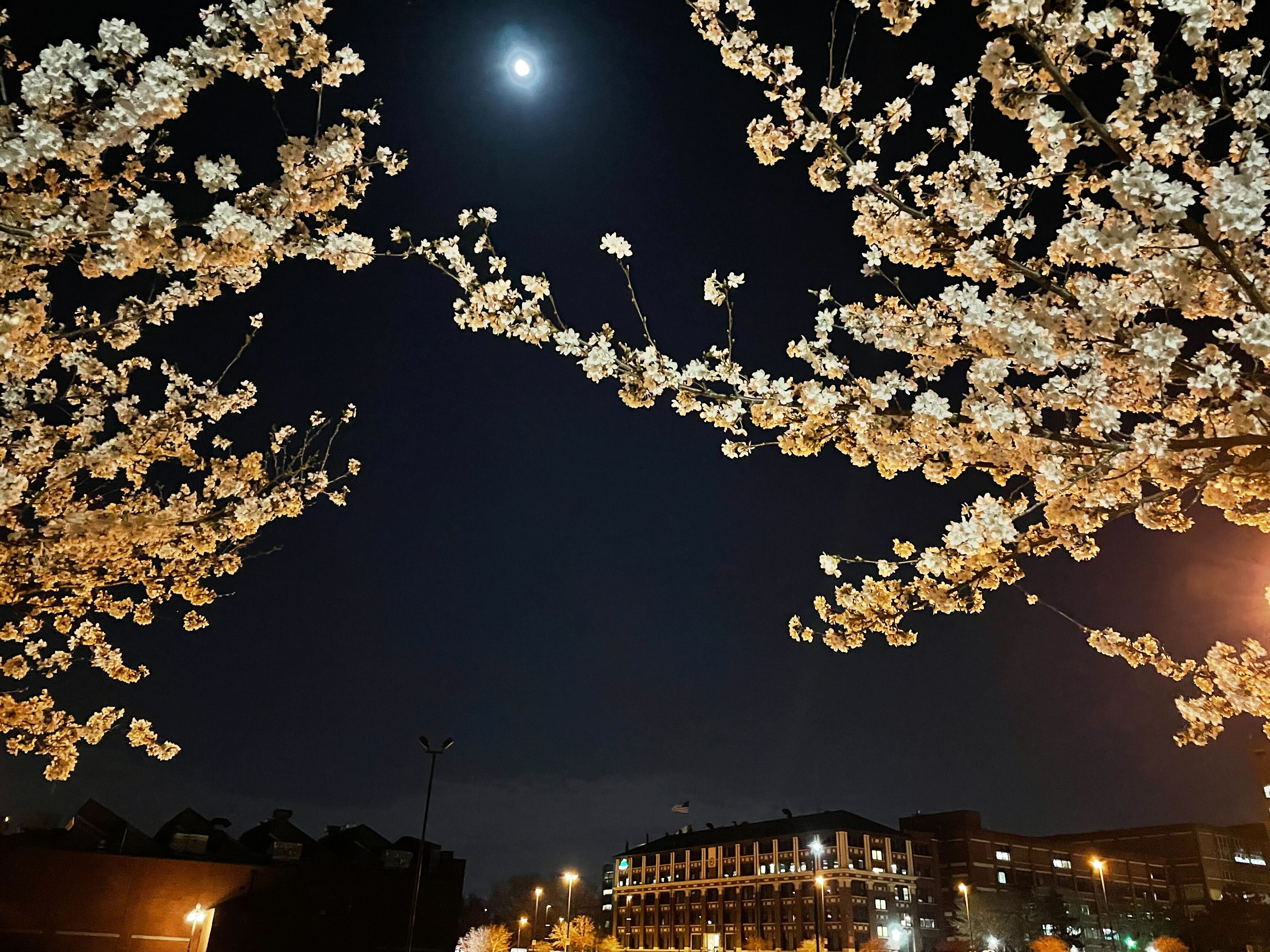