Pick up the Poop, Akron! Not-so-Fun Facts About Dog Waste

Here’s the scoop: As a rise in apartment living has brought more dogs to downtown Akron, we’ve ended up with a stinky situation on our hands.

A number of downtown dog owners are leaving their pets’ waste on the sidewalks, in in-ground garden displays, along the Ohio & Erie Canal Towpath Trail, and at Lock 4. It’s pretty messed up.

Warning: The photo below may be shocking. We've censored it but hope it conveys the scope of the issue. 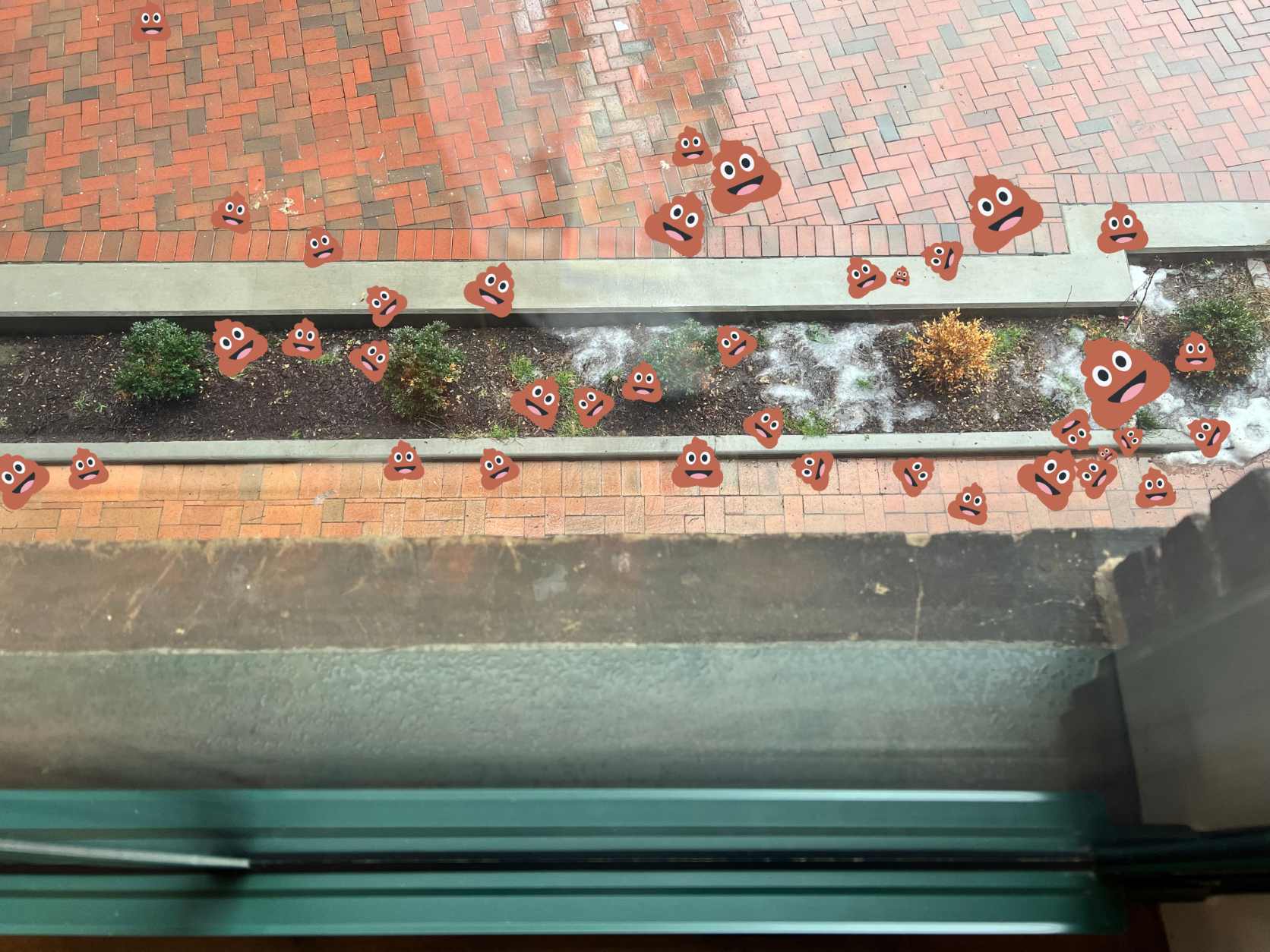 Above: A censored image of dog droppings covering the sidewalk and landscaping downtown (Photo: DAP Staff)

Until now, our downtown Ambassadors have been doing their best to remove the obscene amounts of feces from the sidewalks and public spaces. However, it’s pet owners' responsibility to clean up after their dogs, and having Ambassadors pick it up takes away from time they could be spending on more pressing clean, safe, and welcoming tasks.

According to multiple surveys that have been taken around the country, only 60 - 70% of dog owners report picking up their pet’s waste all or most of the time. If you’re among the remaining 30 - 40% who think it’s a waste of time to pick up your dog’s droppings from downtown public and private spaces, think again. Here are some not-so-fun facts about dog waste: 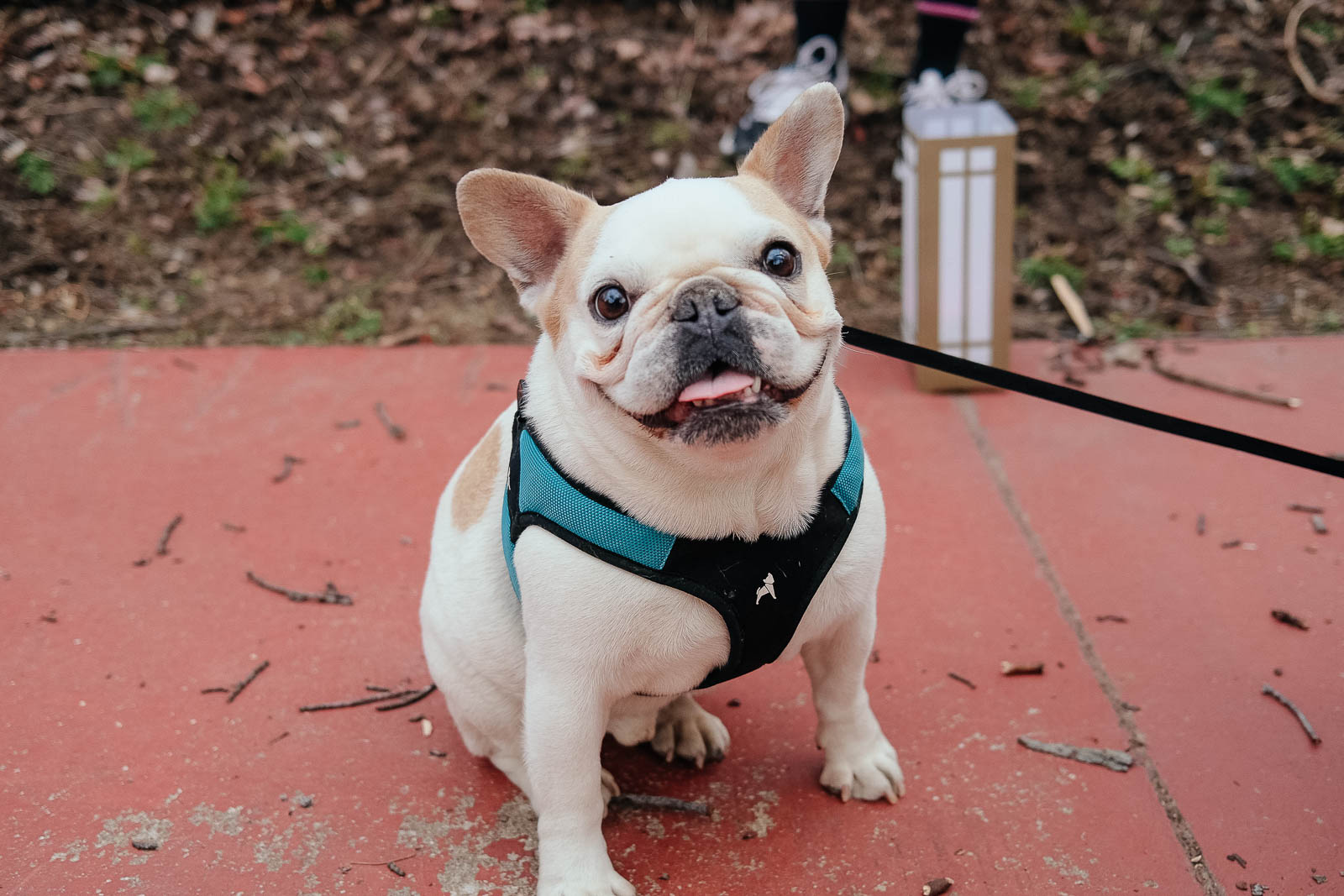 Above: A downtown dog smiles for the camera at the 2021 Sakura Festival (Photo: Jenn Kidd Creative)

1. Leaving your dog's waste hurts you and your dog.

Dog waste contains massive amounts of bacteria called fecal coliform. This and other bacteria in dog waste can cause intestinal illness and kidney disorders in humans. Dog feces can also carry the eggs of parasites like tapeworm, hookworm, roundworm, and whipworm, which–if your dog eats another dog’s droppings–can cause these parasites to spread and result in illness. Symptoms of parasitic infection include lethargy, vomiting, diarrhea, weight loss, anorexia, and anemia. However, even dogs without symptoms can shed the pathogenic eggs in their feces. And even after your dog’s waste “disappears” into the soil, the two hundred thousand eggs laid by a single roundworm every day can survive for many months. Did we mention that these parasites can easily transfer from dogs to humans? 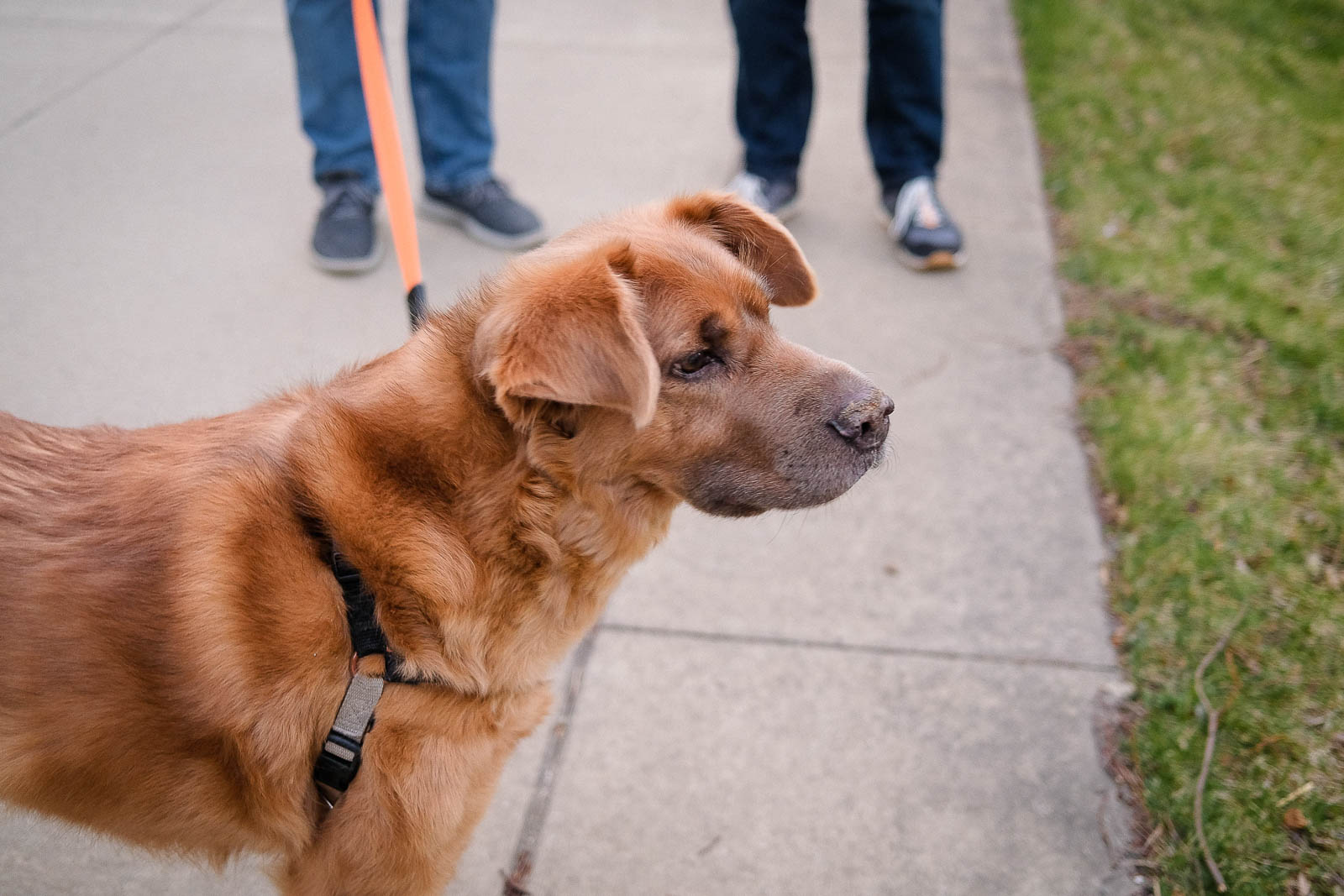 Above: Another downtown dog admiring the cherry blossoms at the 2021 Sakura Festival (Photo: Jenn Kidd Creative)

2. Leaving your dog's waste hurts our water and fish.

Due to their high-protein diets, dogs’ waste can have more than 10 times as much fecal coliform as cow manure per gram, as well as other scary bacteria like giardia and salmonella. When this gets washed down our storm drains by rainwater runoff, it ends up contaminating our rivers and lakes instead of making its way to a sewage treatment plant. In addition to introducing harmful bacteria to water where people may fish or swim, residual nutrients in dog waste can contribute to an overgrowth of algae, which can kill fish and other organisms. Don’t let the mention of nutrients fool you, though–dog waste is not fertilizer and is not beneficial to leave in the soil.

Akron’s history is already mired in water pollution, from the industrial abuse of Summit Lake in the early 1900s to the notorious flammability of the Cuyahoga River that sparked the creation of the Environmental Protection Agency. We’ve done a lot to restore our water since then–let’s keep it clean and healthy from now on. 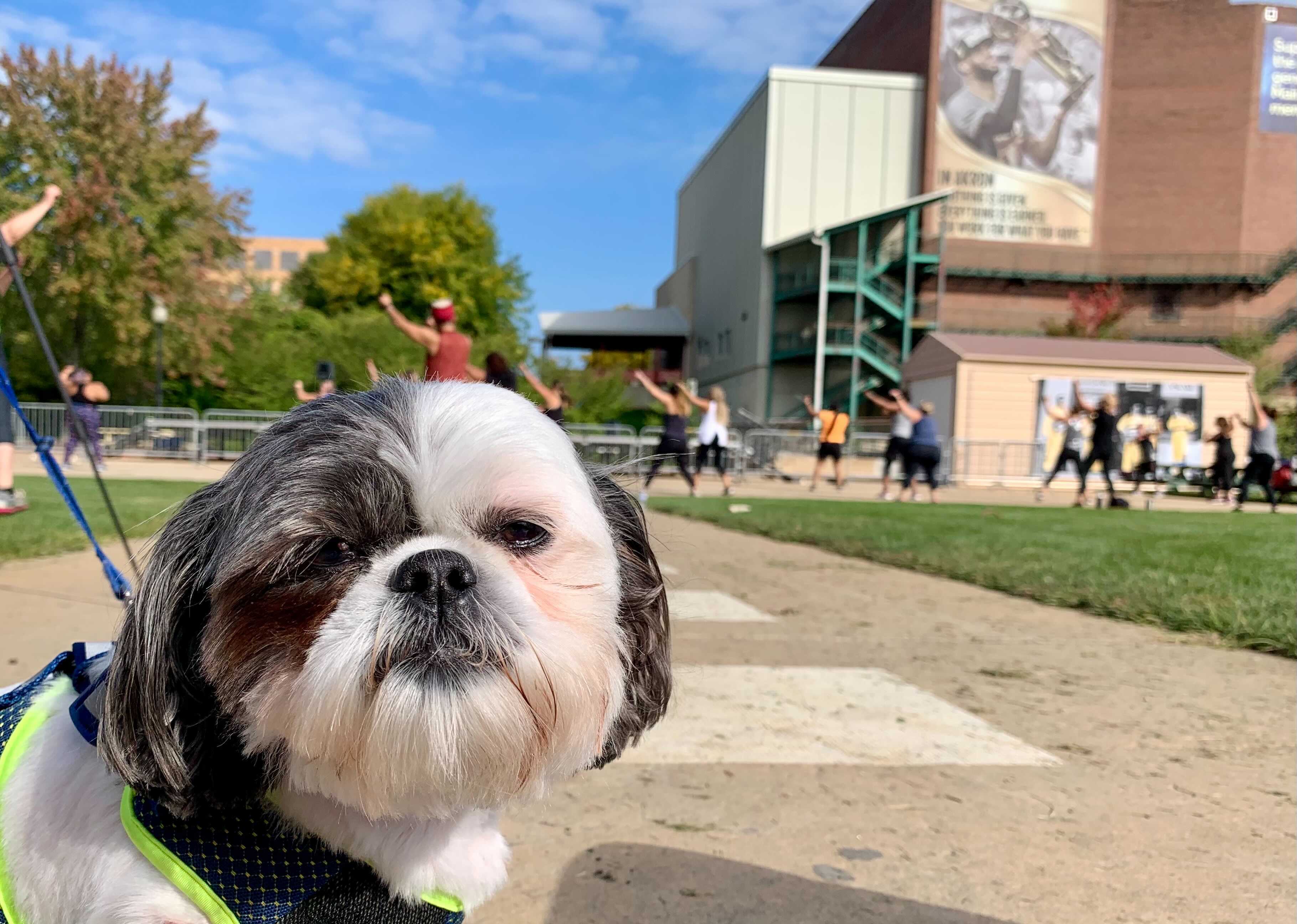 3. Leaving your dog's waste is against the law.

The language in Akron’s Municipal Code: “Dogs are not permitted to damage, deface or deposit waste on public or private property. The dog owner is responsible for the removal and proper disposal of all waste” Sec. 92.13.

Leaving your dog’s waste falls under the umbrella of littering, which is a minor misdemeanor, punishable by escalating fines. There are actually several laws pertaining to dogs and pet owners in the city of Akron, which can be found here. Be a responsible dog parent. Don’t break the law. 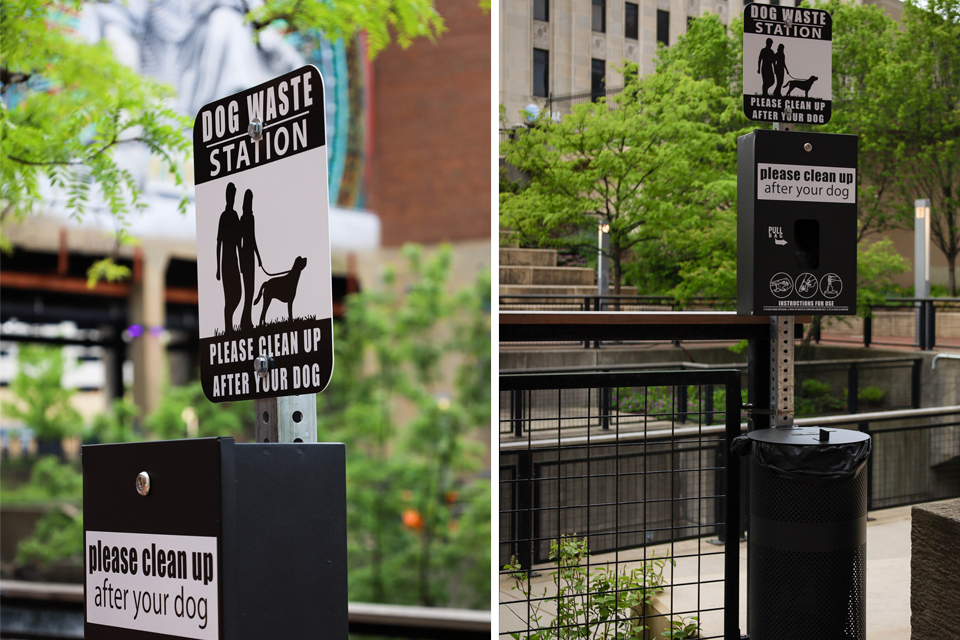 Above: The dog waste station at Lock 4, which features bags and a receptacle to dispose of them (Photo: Payton Burkhammer)

4. If you don't pick up after your dog, Krampus will get you.

Okay, this one isn’t necessarily a fact (or is it?), but at any rate, the Northeast Ohio Regional Sewer District did put together this article that has a few dos and don’ts for taking care of our plumbing and environment.

We love our downtown dogs! And in the coming years, we hope to see even more of them. We know it can be hard when dogs have few designated spaces to run, play, and go to the bathroom, but we’re working on making downtown more welcoming for them.

For now, we’ve provided doggy waste stations at multiple locations to make it easier for you to pick up after your pet. Please use the bags provided by them, even when the weather is crappy and you don’t feel like being outside. They’re located at Lock 2, Lock 3, Lock 4, and Cascade Plaza, with more to be installed soon on Main Street. You can also find your friendly neighborhood downtown Ambassador to ask for a small pouch of plastic bags that attaches to your dog's leash.