A buckeye-crested Ohio historical marker is mounted to the brick face at 37 North High Street, the building that houses United Way of Summit and Medina County. It marks the relative location of the Universalist Old Stone Church, where, at the 1851 Second Ohio Women's Rights Convention, prominent abolitionist and women's rights activist Sojourner Truth gave her internationally famous “Ain’t I a Woman?” speech.

Now, the Summit Suffrage Centennial Committee–a dedicated group of community leaders representing various local organizations–is working with internationally renowned artist Woodrow Nash to establish a Sojourner Truth statue and plaza adjacent to the building, named the Sojourner Truth Building. When completed, the statue and plaza will be the northern gateway to downtown and will offer a look at Akron’s rich historical contributions to the Abolitionist and women’s suffrage movement. 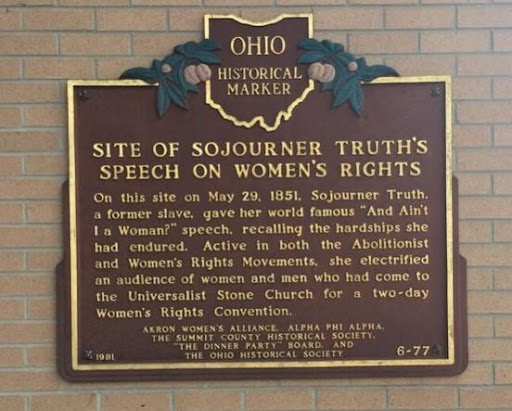 Sojourner Truth was born in the 1790s in New York State under the name Isabella Baumfree. She spoke Dutch, but like most enslaved people, she never learned to read or write. She had five children and a tumultuous early life that involved being sold four times and facing harsh labor and violence, but finally, in 1826, she escaped the horrors of slavery with her infant daughter in tow and settled in New York City.

It wasn’t until 1843 that Baumfree changed her name to Sojourner Truth. She became an itinerant preacher and joined the Northampton Association for Education and Industry, which gave her the opportunity to meet famous abolitionists such as Frederick Douglass, as well as to travel far and wide on speaking tours. Her mission was to spread the idea of an equitable society that embraced people of every race, class, and gender.

In 1851, her travels brought her to the Universalist Old Stone Church in Akron for the Second Ohio Women’s Rights Convention. 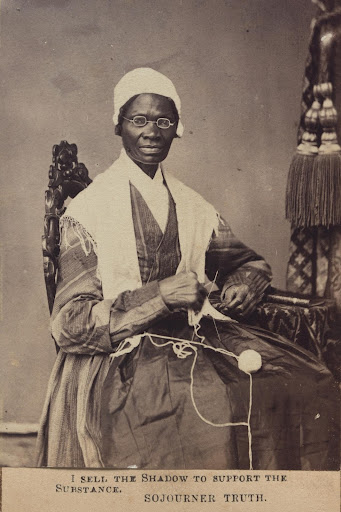 Although Truth’s famous speech is colloquially known as “Ain’t I a Woman?,” she likely never actually spoke those words. The version of the speech that features the widely recognized phrase was published by Frances Dana Gage twelve years after the convention took place and ascribed an inaccurate southern speech pattern to northern, Dutch-speaking Truth. A more accurate version of the speech was published in The Anti-Slavery Bugle by journalist, audience member, and friend Marius Robinson a few weeks after the event.

In the newspaper article he published about her speech, Robinson wrote:

One of the most unique and interesting speeches of the Convention was made by Sojourner Truth, an emancipated slave. It is impossible to transfer it to paper, or convey any adequate idea of the effect it produced upon the audience. Those only can appreciate it who saw her powerful form, her whole-souled, earnest gestures, and listened to her strong and truthful tones.

He then summarized her speech to the best of his ability. In it, Truth declared: “I am a woman’s rights,” which may be the closest statement in meaning to the widely recognized phrase, “Ain’t I a woman?” 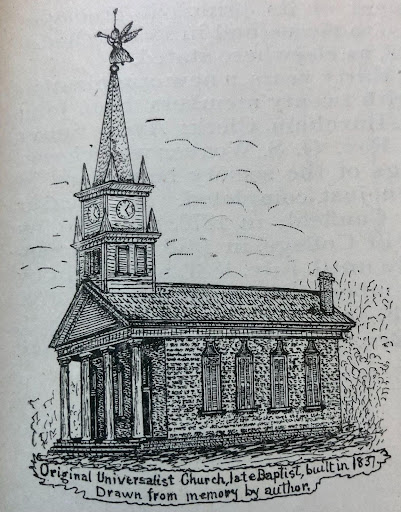 Above: Line drawing of the Old Stone Church by Samuel Lane, which appeared in 90 Years and Over of Summit County, 1893

Summit Suffrage Centennial–spearheaders of the Sojourner Truth Project–is composed of a strong core of leaders from the Summit County community, including Summit County Executive Ilene Shapiro, Towanda Mullins of Delta Sigma Theta Sorority, Inc., Akron Alumnae Chapter, Theresa Carter of the Synthomer Foundation, Jackie Derrow of the League of Women Voters of Akron, Leianne Neff Heppner of Summit County Historical Society, Akron, Pamela Hickson-Stevenson of the Akron-Summit County Public Library, Lisa King of the Summit Metro Parks, and Margaret Maurer of Women’s Interfaith Spiritual Heritage (WISH). These talented leaders came together in 2019 to work on commemorating the 100th anniversary of the 19th Amendment, which gave women the right to vote. The team is proud to be working with Alysse Dambrot, granddaughter of Faye Dambrot, who led the way in having the United Way building renamed for Truth in the early 2000s.

When the Sojourner Truth Project began, it was with the intention of resurrecting plans from over twenty years ago to commission a Sojourner Truth statue near the location of the Old Stone Church. However, the John S. and James L. Knight Foundation funded the project’s application to the National Trust for the African American Cultural Heritage Action Fund. With involvement from the National Trust, the project is able to expand to fill the whole parking area adjacent to the United Way building, which the committee sees as “a wonderful place-making opportunity to create the Truth Plaza.” The National Trust’s involvement will ensure that experts are available to advise the creation of an enriching monumental experience. The involvement also translates to increased visibility for both Akron and Truth’s legacy.

A preliminary concept plan for the plaza features the statue on a platform, seating to represent where audience members may have sat during Truth’s speech, replicas of the Old Stone Church pillars, low-maintenance plants, a lighted path, and outdoor table seating. In addition, the plaza will be ripe with historical symbolism–including Truth’s speech engraved in the pavement.

Towanda Mullins, Chair of the project committee, believes the installation will “inspire locals and visitors, and push us towards acceptance and unity.”

The project is still in early stages, but meetings are scheduled that will begin solidifying design details and establishing a concrete timeline for when the project is slated to break ground and be completed.

The community can also stay tuned for a call for public feedback and ideas, to balance the expert opinions contributed by those involved with the National Trust–thus allowing for the creation of a holistic experience and a sense of community ownership. 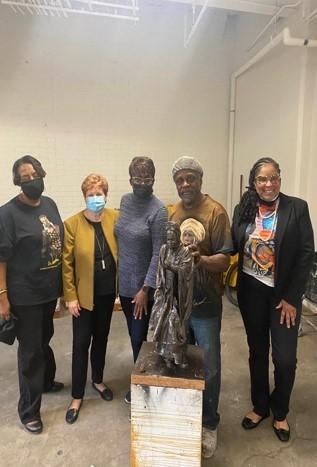 More than 20 years ago, sculptor Woodrow Nash was engaged to create the prototype for a Sojourner Truth statue by the original project committee. He’s known for coining the term African Nouveau, an innovative blend of 15th century Benin and 18th century French Nouveau art. His sculptures, which embody the artist’s “consuming passion to elevate the human spirit,” appeared prominently in Beyoncé’s Emmy award-winning Black is King project. When Summit Suffrage Centennial picked up the Sojourner Truth Project, it only made sense to honor work done in the past by collaborating with Nash once more.

Margaret Maurer, the project’s Education Team Chair, explains, “I was raised in this area, and I was not taught that Sojourner Truth gave her famous and important ‘Ain’t I a Woman?’ speech right here in Akron…This should not happen. Sojourner Truth’s speech allowed Akron to play an extraordinary role in the fight for voting rights for all women, including women of color. We can adopt her story as our own, and we should.”

Maurer and Mullins want to see a future where students are widely educated about Sojourner Truth and Akron’s central role in the fight for voting rights for all. In this spirit, Akron Public Schools students will be involved in future talks so they may have an impact on the direction of the project. “APS kids need to have a buy-in,” says Mullins, so that they feel a sense of responsibility toward the statue and plaza. This is part of their commitment to honor the past while also shaping the future.

Resources for educators and links to learn more about women’s suffrage, connect with organizations, and find local voting information can be found at Summit Suffrage Centennial’s website.

How you can help

Now that the Sojourner Truth Project is involved with the National Trust, the budget has grown. If you are interested in contributing to the project fund, you can do so through the Akron Community Foundation. Mullins emphasizes that every contribution counts and will help move this important project forward.

If you are interested in helping grow local awareness for the event or inviting the committee to present at your workplace or organization, please contact Towanda Mullins at truth.2020.statue@gmail.com.

Her final thoughts: “All women have benefited from our courageous foremothers like Sojourner Truth. The Sojourner Truth statue and plaza is our chance to remind future generations of the hard-fought work on the road to gaining this most fundamental right of citizenship, the right to vote.”