A Look Back at Downtown Akron's 2022 Juneteenth Celebration

From the moment the figurative doors opened at 4:30 for the 5 p.m. ticketed dinner, people poured down the walkway at Lock 3, eager to check in, order a drink, have a seat, and savor the evening. Despite hundred-degree temperatures only days before, the weather cooled to the lower 60s for this outdoor event and brought with it brutal wind gusts that swept a few of the carefully folded cloth napkins all the way up to Main Street. 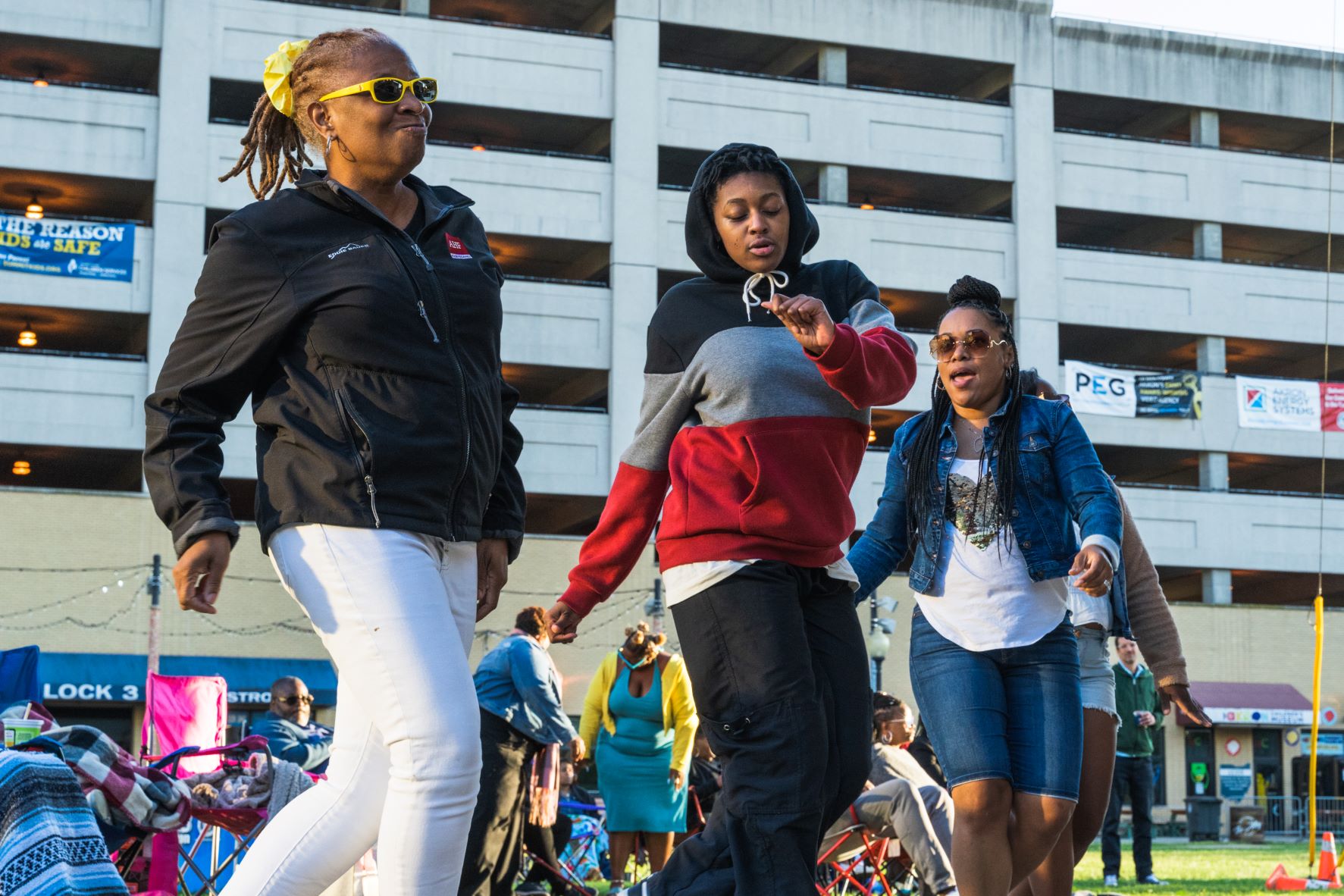 The Downtown Juneteenth Dinner & Conversation was planned by Downtown Akron Partnership in conversation with the North Hill Community Development Corporation, the Akron Black Artist Guild, the Summit County Historical Society, and several other individual community members. From the inaugural conversation in February to the execution of the event, committee members were extremely generous with their time, energy, ideas, and creativity.

There were 15 total tables set up in front of the concession area at Lock 3, all decorated with black table cloths, colorful napkins, freshly picked wildflowers, and the vibrant artwork of Diane Johnson printed on ceramic tiles for all guests to take home, thanks to support from the Ohio Arts Council. These tables warmly welcomed the 120 guests in attendance. Each one also displayed an assortment of gourmet cupcakes from Sweet and Savvy Cake Shop, a bakery soon to open a brick and mortar store in downtown Akron. 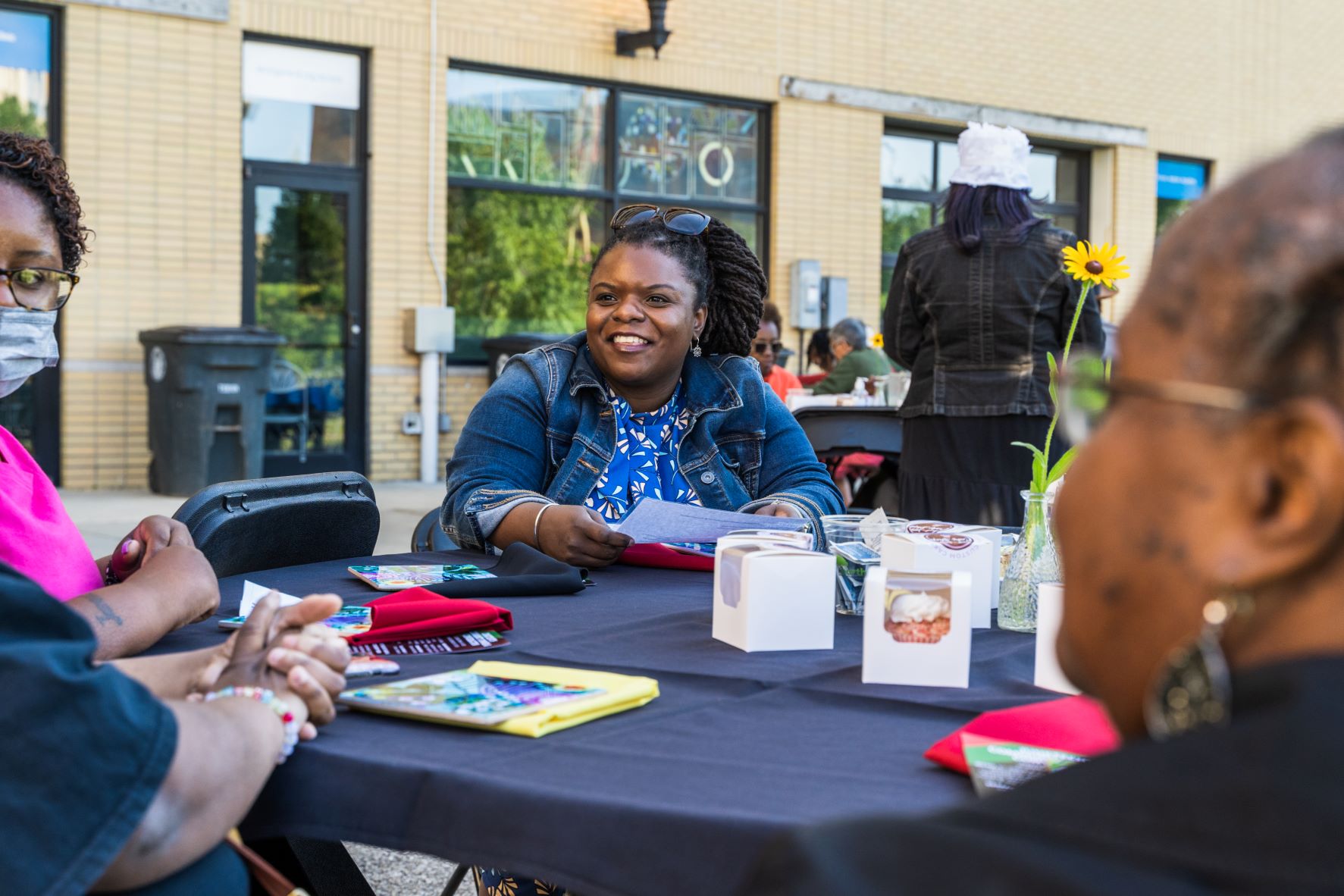 Dinner consisted of a mouthwatering selection by another downtown restaurant, Ernie’s Catering, featuring barbecue ribs, chicken, and portobello mushrooms; cornbread; potato salad; baked beans; and corn on the cob. Guests over the age of 21 were able to accompany their meal with one of two signature drinks—named “Perfect Juneteenth” and “Juneteenth Julep”—by downtown business Perfect Pour. 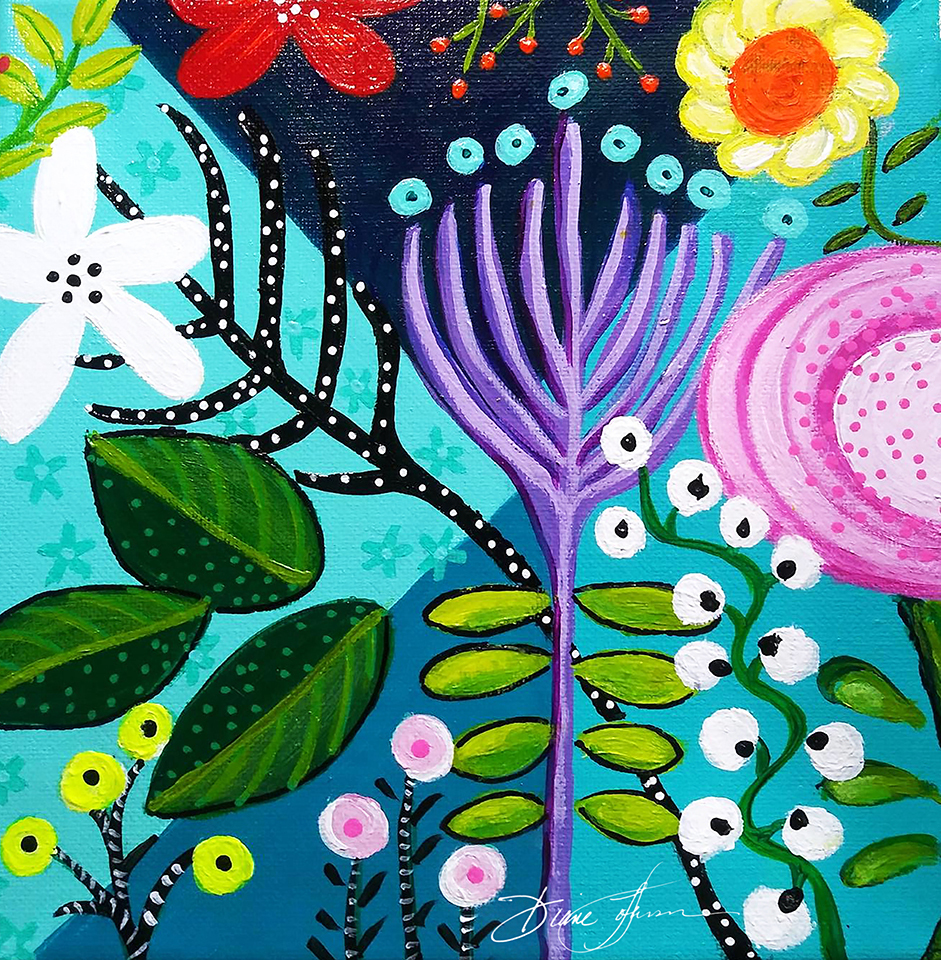 Above: The artwork featured on commemorative tile favors, by Diane Johnson, thanks to support from the Ohio Arts Council

The menu for the evening created a comforting atmosphere in which conversation could bloom. Thanks to Justin Chenault, executive director of North Hill CDC, for crafting thoughtful questions, and Donovan Rogers for playing the role of facilitator, the conversational portion of the evening generated lots of discussion about minority entrepreneurship, arts and culture events in downtown Akron, and public safety. Guests even had the opportunity to scan QR codes leading to online surveys about each topic that allowed their responses to be collected and documented—all for the purpose of actually being able to do something with the thoughts and ideas generated by community members. 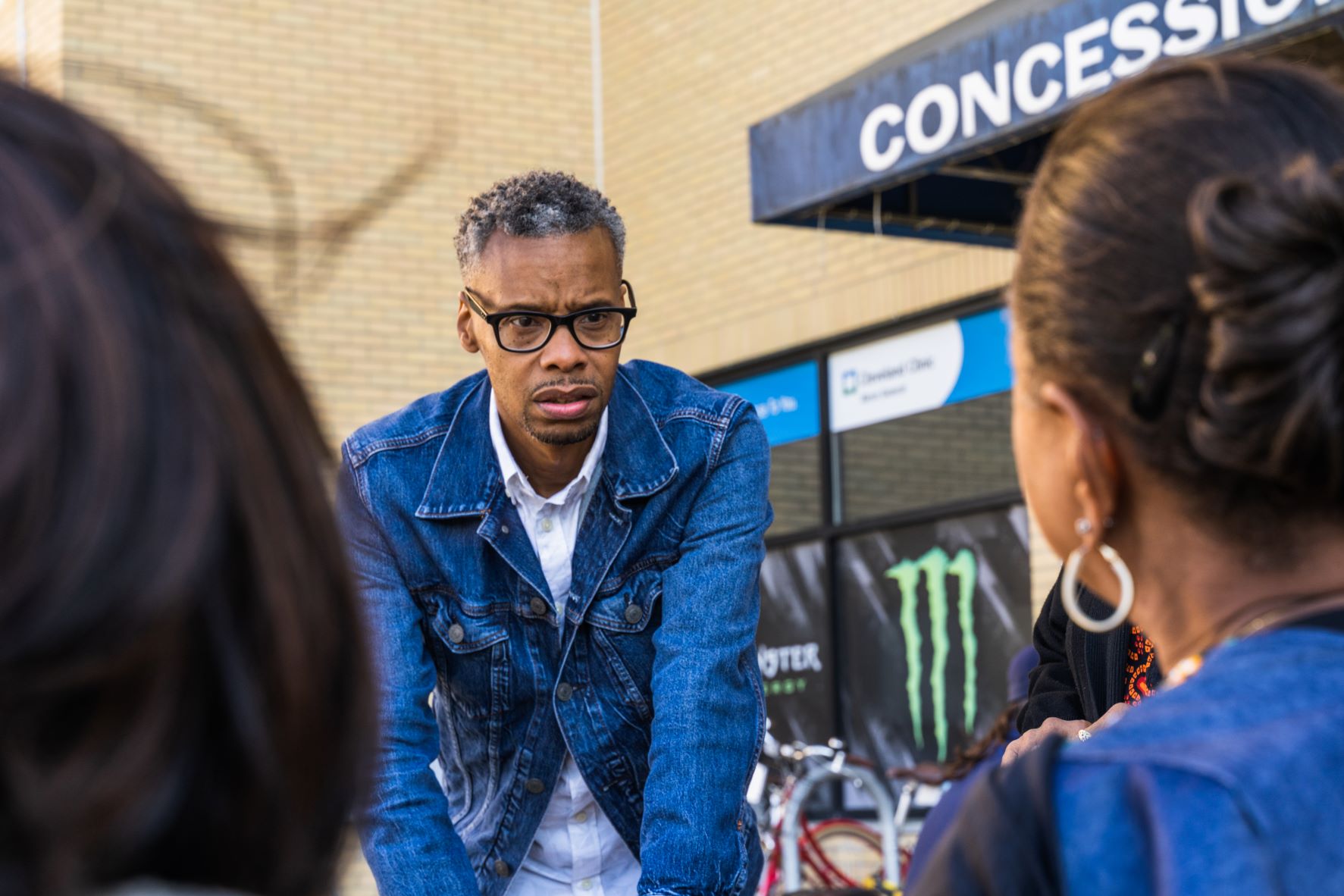 Chenault hopes to gather the survey data and share it with local organizations such as DAP and neighborhood CDCs, Lock 3, and even funders, to inform how we create and program spaces throughout the city. He emphasizes, “The community wants to see what change looks like, and they want to see it on their side of town.”

Dinner was followed by a soulful performance by the Unit Experience Project. The Unit Experience Project is primarily an R&B, Jazz, and Neo Soul band from Cleveland that has been creating music together for more than a dozen years. They covered classics from the 1960s to today and played a handful of originals, as well. In the break between their sets, DJ Forrest Getemgump took over and kept the evening alive. Temperatures may have continued to cool throughout the evening, but audience members sang, danced, and celebrated until the band stopped playing their second set close to 10 p.m. 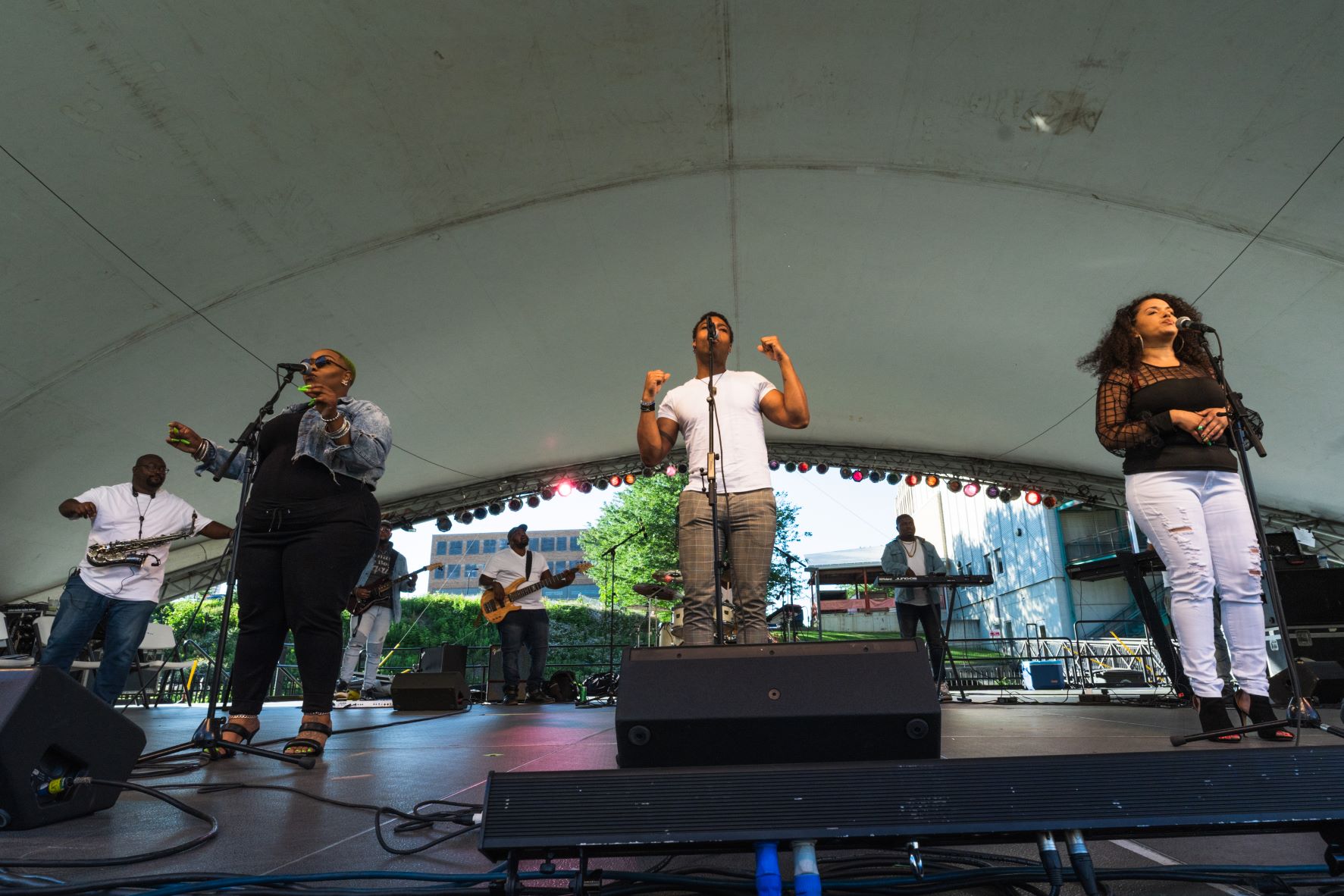 Above: The Unit Experience Project performing on the stage at Lock 3 (Photo: Ashton Blake, Blaak Media)

It’s hard to say if we would have held this celebration at all if it weren’t for Elder Gerald R. Carter, who founded the Akron Juneteenth Festival in 1998 in West Akron. Although Carter passed away in 2020, his legacy lives on. This year, the Akron Black Coalition hosted the Akron Juneteenth Festival at Stoner/Hawkins Park for the 24th year in a row, with a focus on health and longevity in the African-American community.

Several other events took place across Akron all weekend long in celebration of Juneteenth—at Perkins Stone Mansion, at Joy Park in East Akron, in Summit Lake, and more. A downtown celebration occurred for the second year in a row after community members expressed interest in a centralized event that added to, rather than shifted focus from, other neighborhood celebrations. 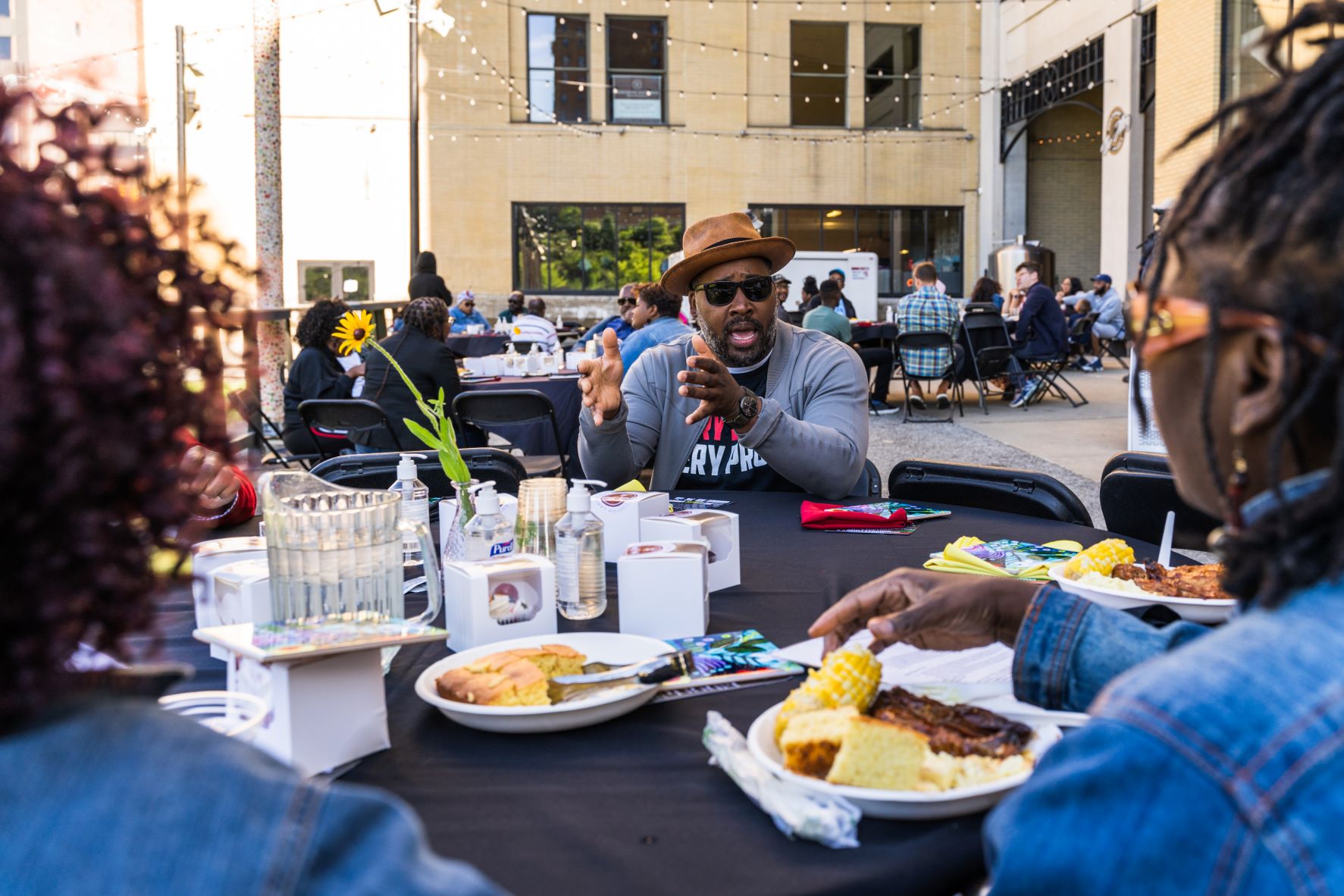 “I think when you have so many organizations present, capturing an authentic experience is a challenge. But the intention was there, and the event went well,” says Chenault. In the future, he’d be interested in seeing the participating organizations each sponsor a table and adds, “Overall, the food was fantastic, the drink was nice, and most of the conversations were great.”

We hope to continue to grow and nurture this event in future years. Thanks to the many organizations who put effort into holding these celebrations throughout the city, this downtown celebration contributed to what was truly a vibrant weekend in Akron.