If you’ve been to Cascade Plaza recently, you’ve probably noticed: it’s beautiful! This summer, downtown organizations—with funding from the Knight Foundation—worked with Groundswell Design Group to come up with a plan for Cascade Plaza that included adding large, blue bench swings, chess tables for the community to enjoy both during scheduled chess tournaments and on an everyday basis, new adirondack chairs, planters in varying shades of blue and teal filled with pollinator friendly, perennial flowers, and additional artistic enhancements.

Above: Downtown visitors enjoying one of the new swings on Cascade Plaza (Photo: Talia Hodge)

The goal is to pull more color, plant life, and vibrancy into the plaza so that in turn, more people will be drawn to it as a fun, comfortable, bustling space. We’ve already seen countless people enjoying these new upgrades during Skate Nights, free fitness classes, and on afternoons or evenings after a meal or during a walk downtown.

Cascade Plaza has been a gathering place for downtowners for decades. It’s been home to the Rib Festival, German Festival, Wine and Cheese Festival, a skating rink, a farmers market, civil demonstrations, concerts, and more. And though Lock 3 may now be the ideal central space to host large events, Cascade Plaza’s comfortable, intimate, playful atmosphere cannot be overlooked.

Above: A photo of Cascade Plaza before 2014

It has a certain natural loveliness to it these days. But although its name conjures images of waterfalls or spilling, sprawling vines, the plaza was actually an expanse of concrete until 2014. The ground was concrete, steps were concrete, handrails were concrete, planters were concrete, and a basin housing an impressive Don Drumm sculpture was concrete. And although concrete makes sense for elements like stairs and sidewalks, and there were picnic tables for people to sit, the space was ripe with potential to become more inviting.

In 2014 and 2015, Cascade Plaza got a space lift. Low concrete walls were replaced by metal railings, and the Drumm sculpture was moved to a more welcoming location visible from Main Street and in the center of a garden bed. A soft carpet of grass was planted in the middle of the plaza to break up the concrete sea, and atmospheric string lights were hung to illuminate new colorful seating areas. Flower beds with small trees and shrubs were also added to the edges of the grass circle. 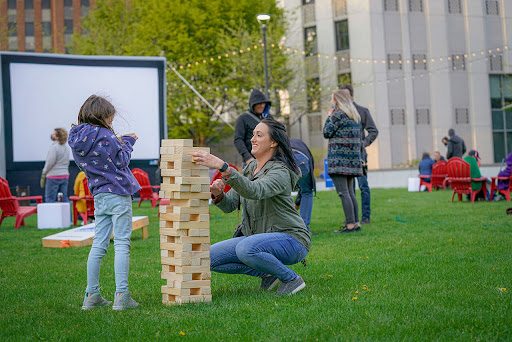 Since then, the space has been used for summer fitness programs such as Zumba, line dancing, yoga, and roller skate nights, and other events such as the Gilmore Girls-inspired Smells Like Snow Coffee Festival and Zips Fall in Love with Downtown. In keeping with its rich history of being a choice venue for downtown events and gatherings, it’s a place for people who live, work, and visit downtown to have lunch, lounge, enjoy the fresh air, and celebrate.

Now, with new, fun furniture options and free programming happening on the plaza several days a week, we think this will only intensify, in the best way possible.

Above: A yoga class on Cascade Plaza (Photo: Talia Hodge)

Keep watching these upgrades unfold, and in the meantime, grab some takeout from a downtown restaurant and head to Cascade Plaza for the perfect urban picnic. And keep an eye on our calendar for events taking place at the plaza!